Catching up with an old friend. 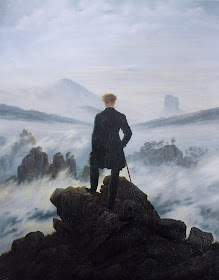 “You run on ahead? - Do you do so as a herdsman? or as an exception? A third possibility would be as a deserter… First question of conscience.” - Nietzsche, Twilight of the Idols.


It is because of the way it feels out here: the wilderness - beyond the frontier. The air, the strangeness, the perspective. It is not in pursuit of solitude; in fact there is a constant ache to share, to say ‘are you seeing this! isn’t this just breathtaking!’


It feels like being close to God: why people climb mountains. To be closer to the ‘es gibt’ - to the origin of destiny, to the point of creation. To be able to see ahead.

There is something qualitatively different from the frontier: at the frontier there is excited babble and buzzwords. Here there is only awe and incomprehensibility.
shackletonjones at 1:16 AM
Share